The bells just rang in the New Year. Apart from fireworks and celebration, there is the dreaded tradition of New Year’s resolutions. Most of these vows are probably broken within the first few weeks, no matter how good the intention. But let’s defy the odds and set up a testing related resolution that actually lasts. It should even pay off…

Beta Family is a powerful platform and tool for your testing, but the real strength shows when you use it regularly. As an app developer, you could publish your app for beta testing once, collect the feedback, take actions accordingly and then release your app on the app store. Nothing wrong with that – it is how we hope you use the service.

But for added value, what if you were to continuously upload each new version of the app for further testing feedback? What better way to verify that your efforts paid off than to invite the same testers back for follow-up? And of course you could parallelly invite a new group of testers to get independent reviews, as if the latest app version were the very first. If you could plot an increasing average score for each version tested, you must be doing something right.

The big guys do it – so could you

Have you ever thought about how often your “blue chip” apps auto-update themselves? Your Gmail, Facebook, Chrome apps – it seems as if they come in a new version every month, or thereabouts. Often, they really do. You can count on major corporations having their QA departments verifying each release. You could do it too by using our crowdtesting community.

Improving and updating your app on a regular basis will also increase your sales. The graph below shows an example on how updates affect downloads. As you can see, you can expect an increase of downloads/sales for 1-2 days following your update release. On the other hand and, without these update-induced peaks your app tends to plummet in the charts, resulting in lower sales and less $ in your pocket.

Graph showing how updates increases sales for the app Linjekartor, a popular app for public transportation in Stockholm. It’s common to see increased sales one or two days after an update release.

The sales peaks after app updates have two logical explanations:

Updating your app on a regular basis will make your app more successful, but always make sure that your app is well tested. Releasing an update that crashes instantly, removes existing features or is not tested on your target group will result in unhappy costumers, bad reviews, and less sales. To prevent this it’s important that you have a testing strategy. It doesn’t need to be fancy. These bullets will give you a good start:

Set a date when your testing should start and finish – Your final testing will most likely be under a lot of time pressure. Make sure to reserve time for testing in your release plan, so that you have a week dedicated for testing and final fixes (based on the testers feedback) before submitting it to the app stores. The good thing is that Beta Family has testers ready to start testing your app, so even if you’re running a bit late, help is near.

Create a release checklist – Write down the most important things you need to check before releasing the app. Some common mistakes are forgetting to test the app without or with poor internet connection, on older devices and OS’s and not using different language settings on the device.

Check your reviews – Take a final look in the reviews on the stores and read them carefully. Is there any feedback that is easy to add in this update? Also, when writing your release note, “What’s new in this version”, don’t be afraid to write that you have done updates based on the feedback given in the review-section. This will encourage your users to keep on providing feedback and might even convert an incoming bad review into a more positively formulated feature request.

The phrase is latin, meaning a blank or clean slate – which is what the app stores offer you with each new app release. Take the opportunity to polish your reputation with an app that becomes increasingly robust with each version. It should pay off as there are some interesting perks that come with releasing often: 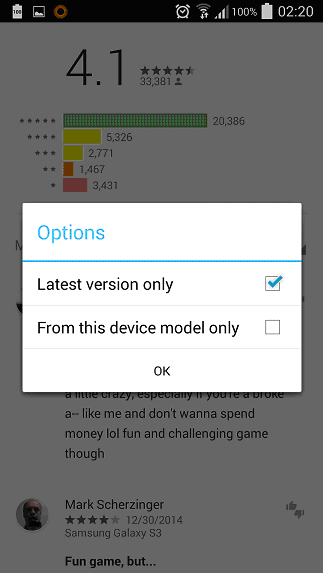 I hope we’ve inspired you to regularly follow up on your apps in 2015 – through scheduled interval test rounds and through multiple yearly releases. All indicators points to it really being worth your while. Be sure to take a few extra minutes in your first Scrum meeting after the holidays to set up a maintainable testing strategy. From all of us at Beta Family, we wish you a great 2015 with lots of success.