I asked our board of advisor Ron Packard Jr from Cloudburst games if he could tell us about how he started with app development and how he uses beta testing for his products. He was kind enough to give us info on the soon to be released puzzle game Castle Breakout – Escape! HD, so keep reading to learn from this successful animation producer. 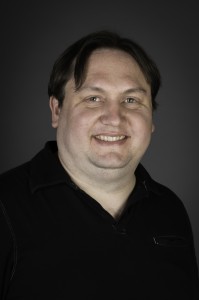 Ron-Packard-JR-profile-photoRon Packard Jr was born in California, USA. His interest in computer games developed early and his parents encouraged him to make his own games in his youth. That proved to be a great idea as he is now a studio producer leading a team of fifteen 3D animators and programmers, working with mobile app development and creating amazing games. His apps have over six million downloads and are at the top of the charts in several countries all over the world.

Hi Ron! Thanks for doing this interview! Tell us about your company and what you are doing.

Cloudburst Games is a mobile content development studio in transition from making talking apps to creating beautiful photo-realistic “room escape” puzzles for adults. Our current games have had over seven million downloads and two hundred million play sessions worldwide. The new room escape genre app we’re preparing to roll out – Castle Breakout – Escape! HD is a very exciting project, which our beta-users seem to be enjoying.

Here are a couple of quotes from our beta testers to provide examples of the kind of response Castle Breakout is receiving:

“The game overall is beautifully well done, with just enough difficulty crafted into it to keep you interested, but not enough to make you quit. A perfect balance.”

“Overall this is a very polished game and one of my favorite puzzle games I’ve played in some time.”

We believe the feedback we’ve had so far for this game points us to the potential for huge success. The beta testers aren’t paid and have no incentive to tell us anything but the unvarnished truth.

One beta tester became a super fan and freely offered us the following image showing an iPad, 6” iPhone, Macbook, and 2nd computer screen all working at once for the game. We have placed this image on our “fan art” blog that’s attached to our website. 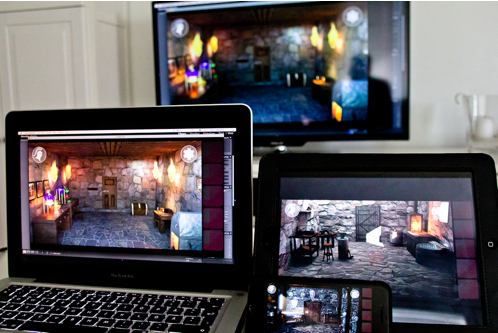 How come you started with app development?

Cloudburst Games started in 2010 doing talking apps. I chose app development because in high school I was an avid hobbyist programmer, and I made a few games that were quite popular in college.

We weren’t always so successful. When the “talking app genre” was yet in its nascent stages, I believed it had great potential because it had a high barrier to entry for programmers because of its complexity, yet easy enough for me to do. My wife and I had a young daughter at the time and I figured that making a girl talking app would be fun – and thus was born the Talking Nicky series. Yet my faith in its potential wasn’t proven to be true as it was never a big money-maker.

How long do you stick with an idea for an app before giving up on it?

As I said, the Talking Nicky series didn’t make much money. At the same time I began, Outfit7 did their Talking Tom Cat which was wildly successful. So after about five or six Talking Nicky’s, about a year later, I switched to animals. I’ve always loved comedy and animals, so switching was appealing to me. I hired a comedian animation director who came up with the funny ideas for the Talking Duke Dog.

Sure enough we did quite a bit better with Talking Duke Dog and we did a Talking Duke Dog 2 which did even better. We didn’t do nearly as well as Outfit7 and on hindsight perhaps we could have done much better with a publisher. But we did gain seven million downloads and a hefty chunk of our needed monthly salary.

In my “focus group” for Talking Duke Dog I had a few real kids at my house and they unanimously said it needed a game. Unfortunately, after three years I wasn’t able to get the money to add a game. And that’s the point we decided to finally leave the Talking App genre. In fact, I’ve sold my talking apps to a kind man who wishes to continue with them.

After about two to three years, Outfit7 took the animal characters very, very far in the genre. It took me until recently to discover that the reason I didn’t feel like committing and following them that far was because I didn’t play with dolls or action figures nearly enough as a child. Those were not my favorite toys by far. I feel that the genre now belongs to those who loved their dolls and action figures when they were kids.

What I recently discovered is that you need to be true to your sixteen year old self. When I was sixteen, I built a mad puzzle on the computer. So I’m now doing a puzzle on the Mac, iOS and Android and I’m excelling a little beyond belief.

I’ve got a collection of contractors who are also avid game players, so we are generally very confident in our ideas. So no, we don’t prototype.

Do you test your ideas on people?

No we don’t, except internally. Rather, I make sure we have enough creative perspectives in our own group and listen and discuss opposing and contrasting ideas within our group.

What motivates you and what are your goals?

My goals are to conquer the top of the Puzzle category within five years. They say you’ve got to go big or go home, well, I think that’s true. Our vision is to give casual gamers who just want a challenging puzzle experience whenever they have spare time something they’ve never experienced before! I want them to feel challenged but not overwhelmed, and enthralled with the graphics nd storyline. We believe this is a formula for substantial success in the “escape game genre.”

What would you say are the top three skills needed to be a successful app developer?

I’m not sure I can speak for every developer because so many people can leverage their unique skill sets in ways that I can’t imagine. I think the important thing is to know yourself and know what your own unique skills are nd how to properly leverage them.

My top StrengthFinder strength is strategy, and my highest Entrepreneur strength is Creativity. So I really excel at looking at new genres and identifying ways to fill an unmet need.

Can you tell us a bit about your new app Castle Breakout – Escape! HD?

Castle Breakout – Escape! HD is a terrific game which takes the current room escape genre and pushes the boundaries, almost creating a new genre. It has eleven stereo medieval songs, and about 100 unique stereo sound bites for each action. The game features stunningly beautiful rendered images, an amazing flight with a magical dragon, a comic book intro and animated animals to give entertainment.

Castle Breakout is due in the Apple & Google store for Mac, iOS, and Android in mid-May. With its oversized images, the game is truly glorious on the Mac.

What problems are you facing right now?

Like with many developers, funding during the development phases is often a challenge. I’ve done this app completely without money (for one and a half years) using the promise of future royalties to pay my contractors. The sale of my talking apps gave me the funds I need to finish Castle Breakout.

What do you feel are the positive aspects of using a crowdtesting platform for beta testing?

It’s been enormously helpful to further the cause of Castle Breakout with Beta Family’s crowdtesting service. Enormously! What we’ve found from extensive testing is that the users are now saying it comes across as “polished.” Beta Family offers free reviews and that has been a life-saver for me.

If I could answer the question, “What’s the number one thing that differentiates a crummy app from a great one?, ” it would be the amount of polish it has. I see in the App Store so many developers who must have worked for years on an app, only to see it fail miserably because it just plain doesn’t work, not to mention don’t perform with elegance or isn’t polished with the details that consumers notice in an app. The need for exhaustive beta testing has never been greater. 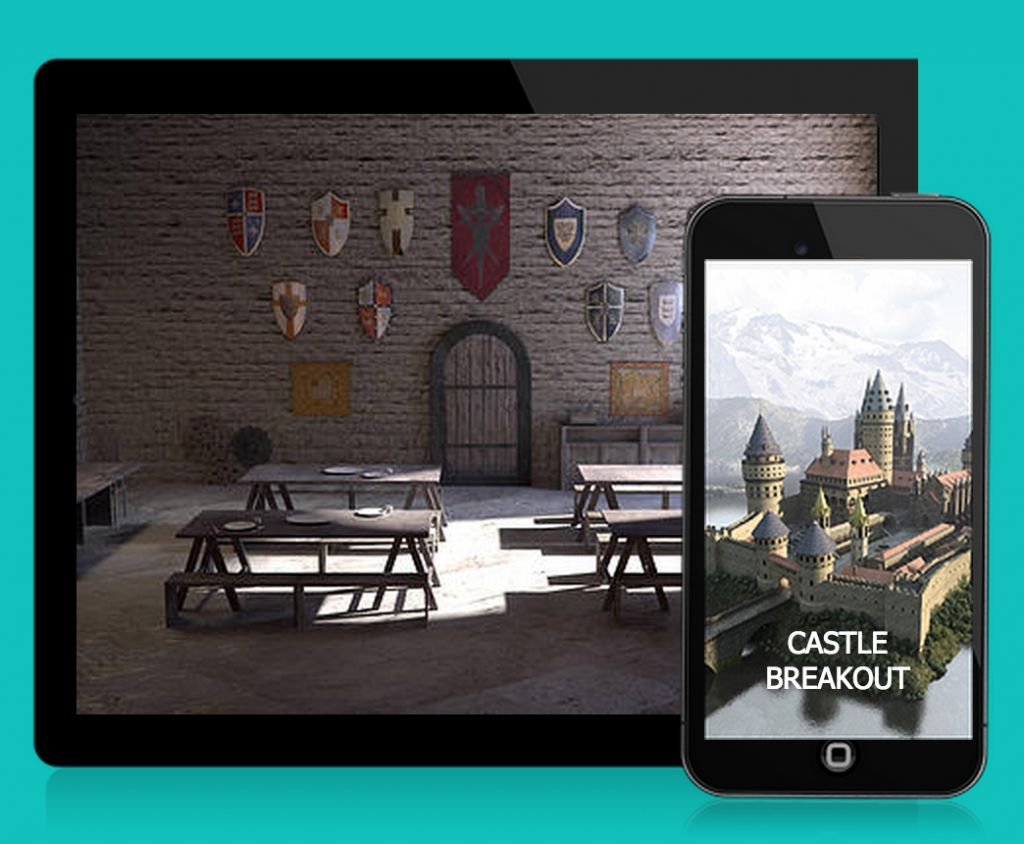 Can you tell us more about your testing plan?

With Castle Breakout, I waited until the app was in a fairly mature state to begin testing. Then I began testing the app every three weeks or so. I’ve given it five tests so far, and I plan to do about two more on Castle Breakout before its launch. I try to find new people for each test for fresh perspectives. I try to pay Beta Family about ¼ of the time to keep them happy, and they seem OK with that.

I tend to give beta testers 5-stars feedback unless they are rude or mean-spirited. Beta testers need to stay positive as it does affect our collective moods.

I also share all my reports – both positive and negative, with my contractors. It tends to excite, motivate, and give us some discussion points about what needs to be fixed. To help facilitate such discussion remotely, we use Basecamp, which is another lovely tool for collaboration.

Why did you choose The Beta Family over other similar services?

As far as I know, the Beta Family is the only beta testing service that provides a community of users. Everything about the service works real smoothly. It’s an excellent service and a great value package. I couldn’t be happier! 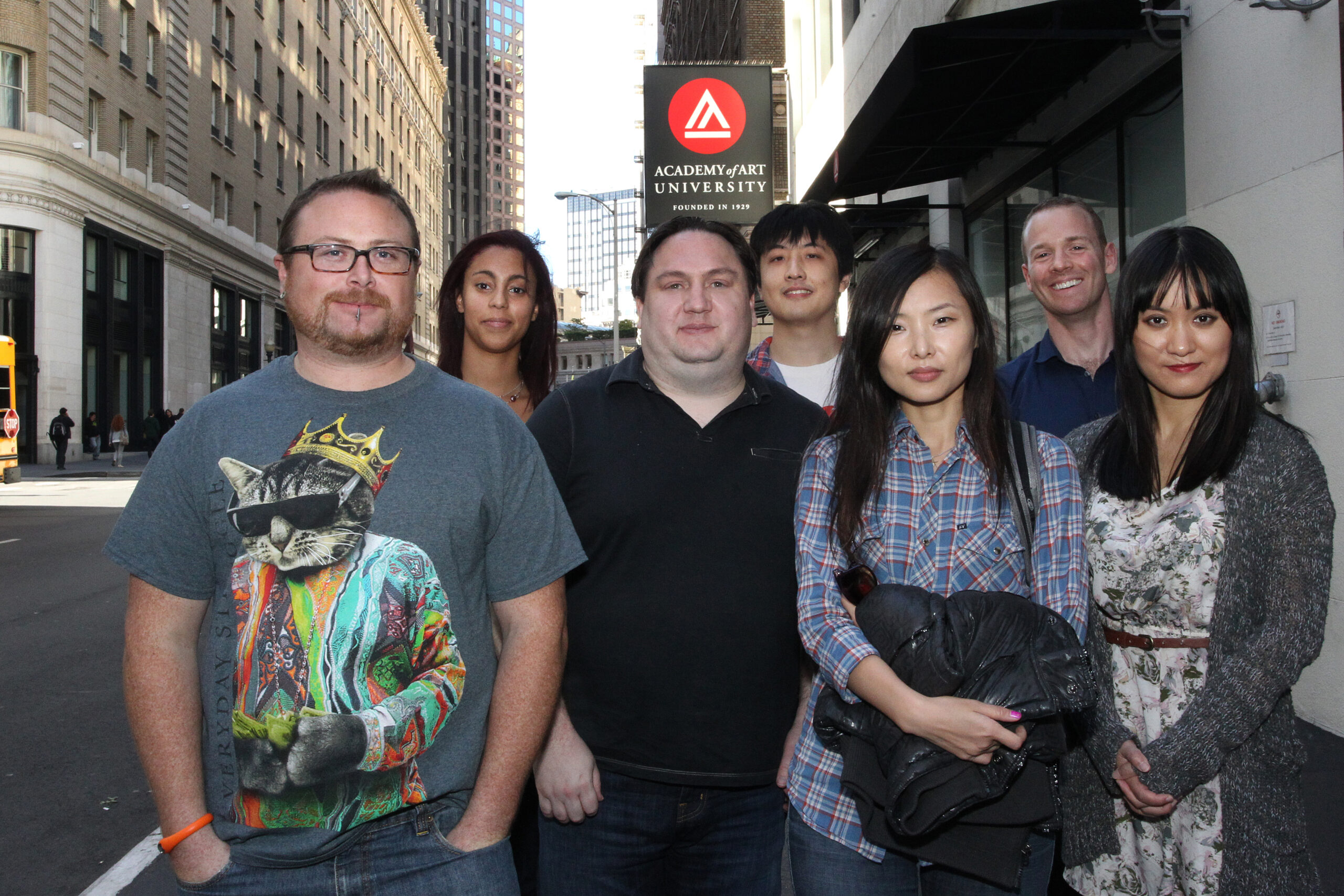 The talented team from Cloudburst-games

I hope you liked this interview with Ron Packard Jr and don’t hesitate to flick me a message if you have any questions. If you liked it then perhaps you’ll appreciate the interview I did with TED Speaker Dr Ayanna Howard.